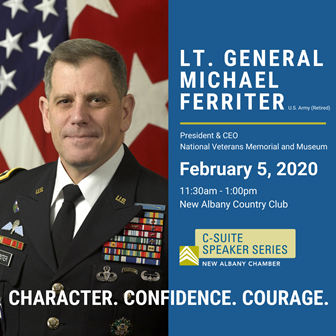 Lt. General Michael Ferriter, U.S. Army (Retired) spent his career building teams and developing leaders and he believes we all have the ability to demonstrate inspired leadership.  He will share how to build character, confidence and courage to face daily challenges as well as how identify obstacles and strategies to manage whatever comes your way.

About Michael Ferriter
Lt. General Michael Ferriter, U.S. Army (Retired) serves as President and CEO of the National Veterans Memorial and Museum. The National Veterans Memorial and Museum was created to preserve, share and celebrate the personal experiences of our nations past and present veterans from all branches of service. Lt. General Ferriter strives to create a community gathering place where the general public can join Veterans and members of the United States Armed Forces in celebrating the service and honoring the sacrifice made by Veterans.

NEW ALBANY CHAMBER IS A PROUD MEMBER OF